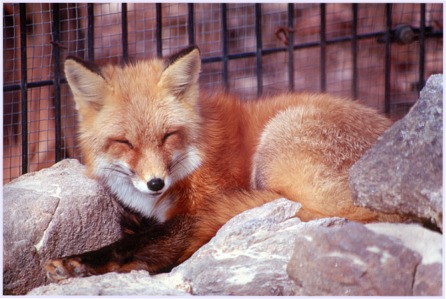 The red fox is a member of the canine family.

It is a shy and secretive animal that hunts mostly at night. Sometimes they can be seen early in the morning or late in the evening near the edge of woods.

They mostly catch different kinds of rodents such as field mice and also rabbit. They will also eat apples, grapes, cherries, berries and fresh corn.

They mark their territory with a strong-smelling spray that will make one think, "skunk!" but it's not as bad as skunk spray.

Mothers will catch and bring live prey back to the den to teach her kits how to hunt.

Fox will cache (pronounced like cash) their food, or bury, uneaten prey to store for a later meal.