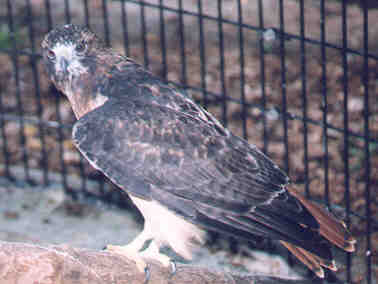 Red-tail hawks are common in Georgia. Look for a large, brown/tan colored bird swooping down in open fields and along medians and shoulders of highways.

These hawks mostly hunt from the air and chase after rabbits, rodents and snakes. Most of the time they are careful when catching snakes but have been known to crash from entanglement in flight or get bitten by venomous ones.

Unfortunately, when birds of prey pursue their meal, it often involves crossing a road and results in a collision with an automobile. The one pictured above lost a wing to such an accident.

They build a large-sized nest about 3 feet across that when abandoned, is sometimes used by great horned owls.