White-tailed deer are numerous in Georgia and are found pretty much in all of the United States.

In the spring/summer they browse green leaves and plants and will stand on hind legs to reach higher vegetation. In the fall/winter, they eat acorns, nuts, corn, and buds of trees.

Males, or "bucks", grow antlers-not females, or "does" (pronounced "dohs").

Antlers begin growing in early summer and have a layer of fuzzy skin called velvet that supplies nutrients to the antler. See photo below. When the antler has finished growing, the velvet dries up and is rubbed off by scraping against trees. Antlers are used for battle to win the doe of honor. They are shed after the mating season around late fall. Next year, they will grow back larger than before.

What is the difference between an antler and a horn? (horns go "beep beep!" ha ha) Actually, horns have only one main stem and are not shed. Antlers have many tines or points, and are shed each year. Bison have horns.

Baby deer are called fawn and are caramel-colored with white spots for excellent camouflage.

A lot of people see a fawn near the edge of the woods and think it is orphaned. Unless the mother has been hit by a car and is laying nearby, it is usually not orphaned. The mother will leave her young to find more food and sometimes might be gone for a day or two. But she will come back. 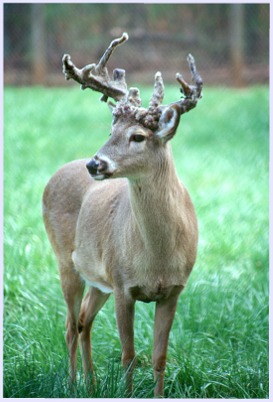