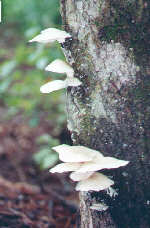 In the early 1980s, Dauset Trails started with a self-guided trail that looped through the woods by a small lake with 13 points of interest. Later, injured, orphaned, or nuisance animals were gradually added for viewing near the Visitors Center. These non-releasable animals were given exhibits for protection and display and gradually grew to become the Animal Trail. The Animal Trail winds about 1/3 a mile through the woods featuring mostly native non-releasable mammals and birds of prey. It is easily accessible by foot, strollers, and wheelchairs. These animals are used to teach students of all ages the importance of each species and its role in our ever-changing world.

It is amazing how so many birds of prey are accidentally hit by vehicles. This happens mostly on rural back roads, highways and sometimes interstate roads. Some hawks have crashed through windows of residential and commercial buildings. Some fall from nests.

Oftentimes, baby animals hiding in brushy areas are mistaken for orphans by well-meaning citizens. Fawns are frequently “helped” out by the public because the doe was not seen nearby. Sometimes a doe will leave her young hidden up to three days to search for better habitat. 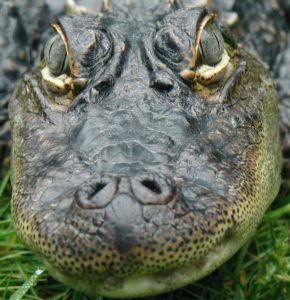 Dauset Trails occasionally takes in animals that cannot be released and many calls are directed to local rehabilitators to care for the majority of injured and orphaned wildlife.

If reptiles are your main squeeze, then stop by the “Wonder Room” located in the back of the Visitor’s Center on the ground level and discover live alligators, turtles, lizards and venomous and non-venomous snakes. 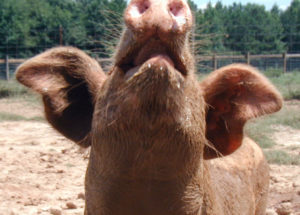 Now, if farm animals such as a mule, donkey, cows, pigs, goats, and chickens excite your fancy, then mosey over to our barnyard exhibit and see all of the above. Or, if you like aquatic animals, we have a variety to see in the small lake behind the Visitors Center. You can buy food to feed the ducks, geese, big catfish, bream, and assorted turtles that live there.

Over the years, Dauset Trails purchased adjacent acreage (1400 total acres now) and added a Woodland Garden Trail, 20 miles of scenic hiking and mountain biking trails, expanded the group camping area with more tent pads, fire rings and "Turkey Roost" camping platforms, created a 1940's era Barnyard and expanded it to include a blacksmith shop, cane syrup cooking area, country store, and tenant house, added a tree identification trail, horse riding trails, expanded the picnic area with a playground, expanded the landscaping, and offer the annual Bluebirds and Bluegrass Festival in April, a Movie Under the Stars event in October, and the Cane Syrup Festival the Saturday before Thanksgiving.